Posted at 10:21h in News by Johnny Mansfield 0 Comments
Share

2017 is a special year at Priory Integrated College, marking 20 years as an integrated college.  The celebrations began last Friday with the college’s annual Celebration of Achievement Afternoon, when pupils past and present received awards for academic achievement, sporting endeavour, creative and expressive arts, charity and community work.

‘This year our celebration of pupil achievement is extra special,’ said Principal Jacqueline Magennis to a packed audience of parents, Governors, staff and special invited guests from across the community.  ‘In addition to acknowledging the fantastic progress our pupils have made, we are also celebrating our 20 year journey of transformation to become an integrated college, welcoming young people from Catholic and Protestant traditions, other religions and none, from all cultural and social-economic backgrounds and of all abilities.’

‘Being integrated isn’t an easy option,’ said Mrs Magennis in her address.  ‘It doesn’t mean simply bringing children together in one place.  It’s about ensuring every child enjoys parity of esteem.  In everything we do, we must engender in every child an enjoyment of diversity and a realisation that difference is not something to be afraid of.’ And there is clearly a demand for integrated education in the area.  This year Priory once again received a record number of applicants to year 8, and is now one of the most oversubscribed schools in the area. Today the College is a diverse and welcoming environment for pupils from a wide range of primary schools across the area and from all sections of the community.

The awards were presented by Roisin Marshall, Chief Executive of the Northern Ireland Council for Integrated Education since 2016, who gave a keynote speech which emphasised the unique contribution integrated schools make to enhancing young people’s educational experiences and fostering community cohesion.  Speaking directly to the young people in the audience, Mrs Marshall said, ‘You will forever remember your experiences here in Priory, and when some of you are in the government of the future, I want you to remember your experiences.  Know that challenging the barriers to our society living together side by side is the right decision. What you have had in Priory is an experience that most people in NI haven’t had.  I am inviting you to be advocates for integrated education.  Be the change you want to see. Don’t rely on others to change things for you.’

In his vote of thanks to Mrs Marshall, Head Boy Desire said, ‘Integrated education has helped people like me from minority communities to feel accepted in our school environments.’ Rachael, Head Girl added, ‘The learning environment I have experienced here in Priory has impacted on me in so many ways, enriching my knowledge and understanding of other cultures.  As a result I have built positive relationships with people from a wide range of communities, both within and beyond school.’ 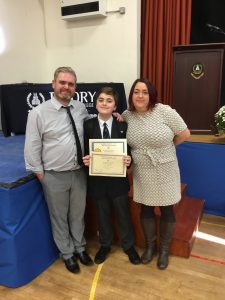 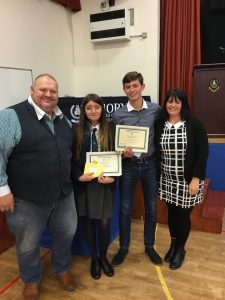 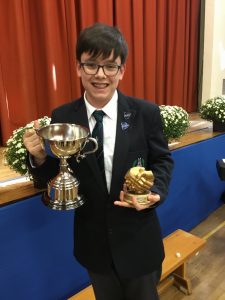 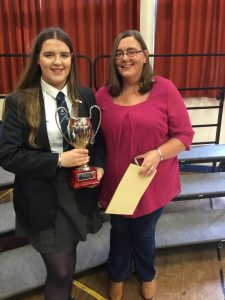 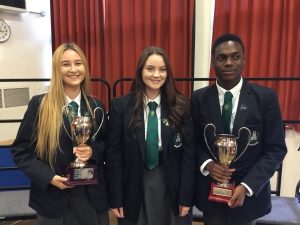 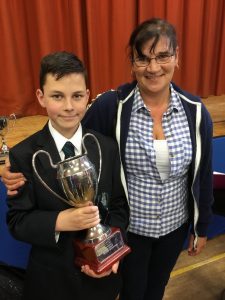 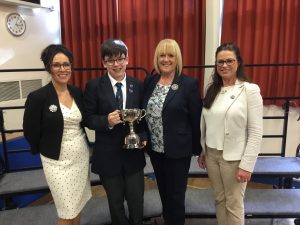 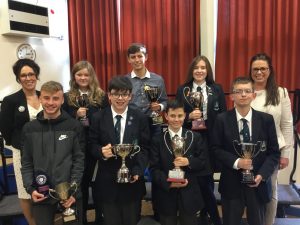 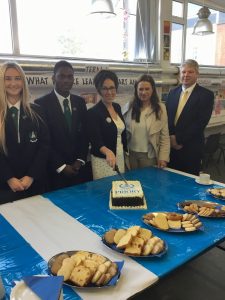 Integration is not the only reason for Priory’s ongoing popularity. In August 2017, almost 80% of its Year 12 pupils achieved at least 5 GCSE qualifications at the top grades of A* – C, with many including English, Maths and Science, qualifications that are vital to those who aspire to higher education.  At A level, Priory’s results continue to be outstanding, with 78% of students achieving top grades in three or more subjects and all pupils achieving at least 2 A levels at A*-C, an outcome which compares very favourably with other schools in both the selective and non-selective sectors.  Many of these young people are now studying at university here in Northern Ireland and throughout the UK, including a number of students who took time out from their studies at Queen’s University, Belfast, to be at the college on Friday to receive their awards.   Shannon, last year’s Head Girl, won the Principal’s Prize for Achievement at A Level and is now studying for a BA Honours degree in Business Management at Queen’s University, Belfast.  Rhys was awarded top student in BTEC Level 3 Sport and is now studying for a BSc Honours degree in Psychology also at Queen’s.  Marcus, last year’s Head Boy, received The Attendance Cup and The Charity Work Cup.  Marcus is now studying to be a teacher at Stranmillis University College, Belfast.  Amongst the other prize winners this year were:  Thomas (Principal’s Prize for Achievement at GCSE), Nicole (Performing Arts Cup), Robert (Male Extra Curricular Cup), Bryony (Female Extra Curricular Cup) and Cohen (20th Anniversary Cup for Enhancing Integration).

‘What makes these results even more remarkable,’ said Mrs Magennis, ‘is that they were achieved by pupils who joined us in Year 8 representing the whole ability range.  We are proud to say that Priory does not select pupils at the age of 11 based on their ability to pass an entrance test.  The results achieved by our pupils in August, and the fantastic achievements we are celebrating today in sport, cultural endeavour, enterprise, charity and community work, are a demonstration of what all young people can do given the right level of support, encouragement and challenge from school and from home.’

2017 also marks the start of work on a new build for Priory.  ‘Fresh Start funding will ensure that the young people in Priory finally get the educational facilities they deserve,’ said Chair of Governors, Stephen Clarke.  ‘Thank you to everyone throughout the HOLYWOOD community: pupils, parents, governors and staff past and present, and to the friends of the college for your unerring support over the years.  The last 20 years have been fantastic – the best is yet to come.’