From New York to Holywood…

08 Oct From New York to Holywood…

Posted at 19:45h in News by Johnny Mansfield 0 Comments
Share

Priory College sixth form pupils were delighted to take part in a virtual Q & A last night with the award winning actress Saoirse Ronan.  The Irish and American actress has been nominated for 4 Oscars and her multi-award winning back catalogue of film credits include Little Women, Mary Queen of Scots, Lady Bird, Brooklyn, The Grand Budapest Hotel, The Lovely Bones and Atonement.

Four pupils from our year 13 & 14 Creative Digital Media class and Drama class linked to the zoom call from school at 8pm and 1 pupil linked in from home with Saoirse, who was in America.   These pupils are currently working on a filming unit where they will write the script and produce a short film for their course.  This was a fantastic opportunity for our pupils to ask questions and seek advice from one of the highest profile names in film. 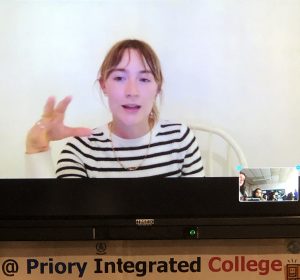 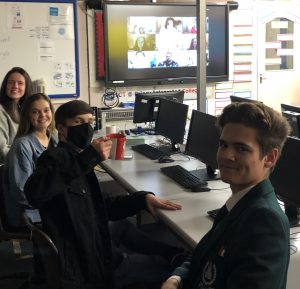 Saoirse spoke elegantly of her various roles and experiences, explaining what it is like to live as an actress both on and off screen.  She provided valuable advice for young actors learning to be in front of the camera.  The pupils felt the advice was very inspirational and encouraging and they are keen to pursue a career in the filming industry, across a range of roles.  They enjoyed listening to her experiences of working with professional make-up artists, famous actors and directors, and tips on how to get into the film industry.

Chloe bravely asked for information on what Saoirse is currently working and what will be the next film, but unfortunately she was unable to give away any details on this!

Leo wanted to know what Saoirse finds more challenging, the live action films such as Brooklyn or Hanna, or a voice over for an animated film such as Arriety.

Having gained an insight of what it is like to get into the filming industry and what it is like being on screen, our pupils feel motivated and confident in pursuing their careers in this industry.

We are grateful to Cinemagic for this fantastic opportunity to meet Saoirse and very much hope to participate in future events with Cinemagic.