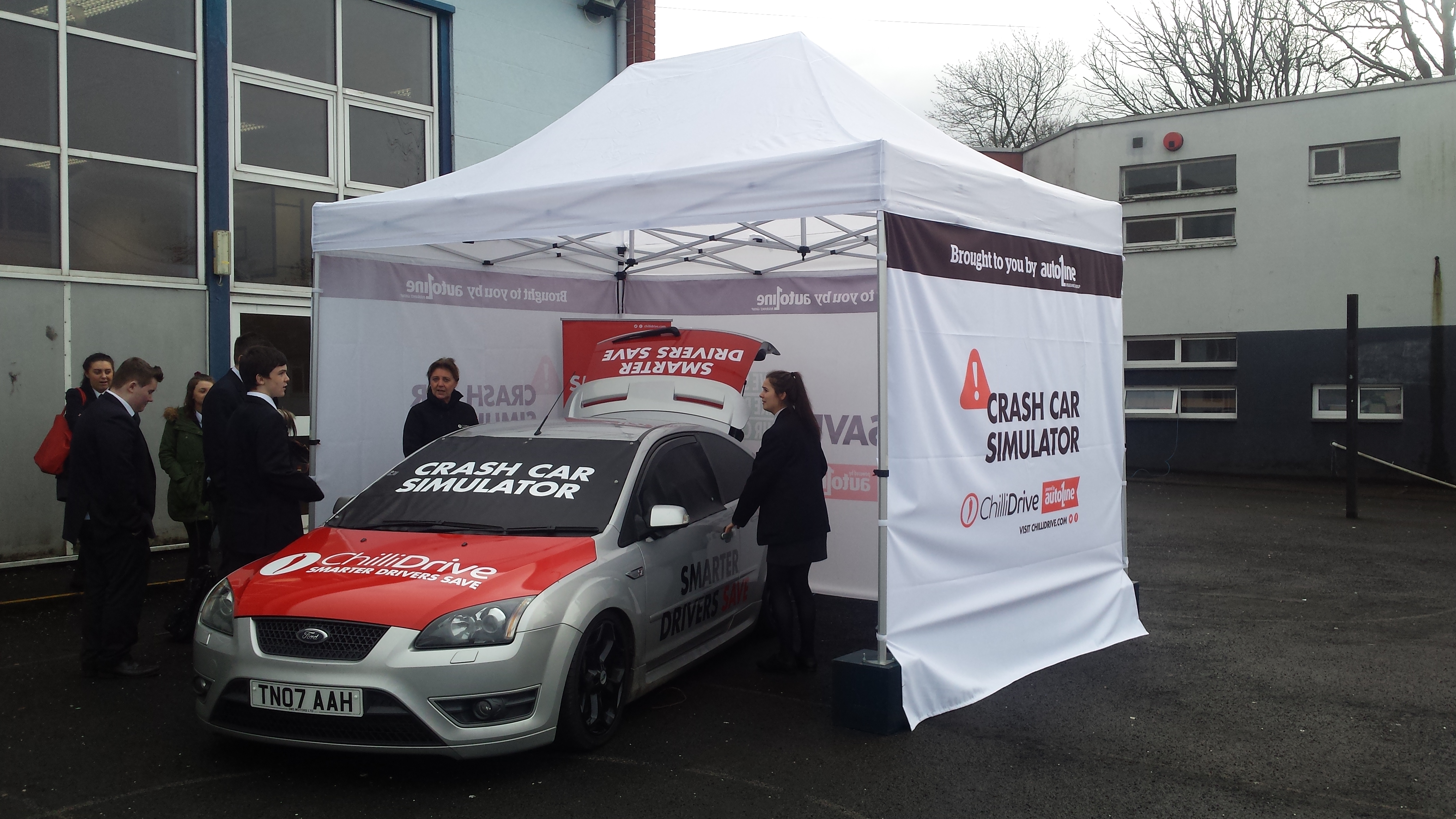 Posted at 10:02h in News by Johnny Mansfield 0 Comments
Share

Year 13 pupils at Priory College have taken part in a road safety initiative which includes a car crash simulator, one of only a few in use across the UK.

Delivered by Northern Ireland insurance broker Autoline Insurance Group in association with the road safety charity, ‘Brake’, the ‘2 Young 2 Die’ campaign encourages students to think about issues such as speed, alcohol and drugs, distractions and the consequences of crashes.

In addition to using a range of hard-hitting videos, statistics and workshop discussions, the initiative now includes a specially modified Ford Focus.  Equipped with hi-tech equipment to simulate a real-life crash incident, the aim is bring home the grim reality of careless driving.

Last year 74 people were killed on Northern Ireland’s roads, of which over 30% were aged under 25. Five of the fatalities were in the Ards and North Down Council Area.

“Road safety is a major issue for both pupils and parents, particularly for young drivers getting behind the wheel for the first time.  Autoline’s ‘2 Young 2 Die’ session and simulator crash car have made a very powerful impression on our students, giving them invaluable insight into the stark realities of a car crash and advice on how to keep safe on the roads.”

As corporate ambassadors for ‘Brake’ since 2013, Autoline has reached 3,000 pupils with the campaign so far. The sessions are delivered free of charge and are available to schools and youth groups across Northern Ireland.

The newly introduced car crash simulator uses a high quality sound system, hydraulics, smoke and lights to recreate a true incident which resulted in multiple fatalities and a prison sentence for the 17-year old driver.

“As a local insurance broker we’re passionate about working with the local community to make our roads safer and getting alongside younger drivers to tackle issues relevant to them.  In the last three years we’ve used the campaign to encourage young people to think about issues such as speed, alcohol, rural roads and drugs, and the irreversible consequences that a car crash has upon victims, family and friends.

We also want students to appreciate the dangers involved when travelling with a driver who takes unnecessary risks. New regulations being introduced by the Northern Ireland Assembly will restrict the number of passengers new drivers can carry between 11pm and 6am and an improved training programme for learner drivers will also help.

“The simulator car is part of this wider effort to improve road safety.  It is a very sobering and vivid experience, using hi-tech equipment to reinforce the issues we discuss and drive home the message that careless driving ruins lives.”

In addition to the ‘2 Young 2 Die’ campaign Autoline has also recently developed ‘ChilliDrive’, an innovative product that turns a smart phone into an in-car ‘mentor’. By analysing speed, acceleration, braking and cornering, it enables users to measure their driving skills, and rewards safer drivers with lower premiums.